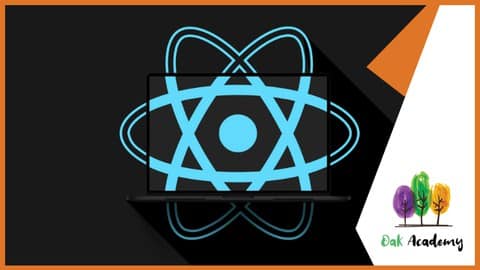 React is one of the best choices for building modern web applications. If you are new to React or maybe you’ve been struggling to learn and truly understand what’s going on then this course is the best way for you to learn React JS.

In this course, we will take you through everything you need to know to master web development using ReactJS by providing powerful knowledge through a mixture of diagrams and the creation of a simple application.

React is an essential Javascript framework for web development. It is the most popular framework for developing web, mobile, and desktop app user interfaces.

No Previous Knowledge is needed!

You don’t need to have previous knowledge about React. This course will take you from a beginner to a more advanced level with hands-on examples.

You will be confident in using React JS, and if you ever get stuck, we will be there to help.

So we have made this course as simple as possible in order to take you through step by step so you can feel confident and get a truly good understanding of how to utilize ReactJS.  In this course, we will be teaching React by creating various projects.

Here is the list of what you’ll learn by the end of the course,

At the end of the course

By the end of the course, you will be able to build amazing React single-page web applications.

Whether you’re interested in adding React to your existing dev skillset, or you want to develop full-stack web apps by using tools like NodeJS, Redux, and MongoDB in conjunction with React, Udemy has a comprehensive selection of courses to choose from.

Why would you want to take this course?

Our answer is simple: The quality of teaching.

OAK Academy based in London is an online education company. OAK Academy gives education in the field of IT, Software, Design, development in English, Portuguese, Spanish, Turkish and a lot of different language on Udemy platform where it has over 1000 hours of video education lessons. OAK Academy both increase its education series number by publishing new courses, and it makes students aware of all the innovations of already published courses by upgrading.

When you enroll, you will feel the OAK Academy`s seasoned developers expertise. Questions sent by students to our instructors are answered by our instructors within 48 hours at the latest.

It’s no secret how technology is advancing at a rapid rate. New tools are released every day, and it’s crucial to stay on top of the latest knowledge for being a better React developer. You will always have up-to-date content for this course at no extra charge.

React is a front-end library in Javascript that was developed by Facebook. The simplest definition of React is that it is a user interface library used for building UI components for the web. But if that was all React did, it would be little more than a template library. Developers define components in React by using an HTML-like syntax called JSX. These encapsulated components manage their own state, making it simple to pass rich data to a component and keep the state of the application and its components out of the Document Object Model (DOM). These features give React components the ability to react dynamically and efficiently to changes in their state. A set of simple components in React can be composed into either simple single-page applications or large, complex web applications.

What is React used for?

React is an open-source JavaScript frontend library. Some developers consider it a frontend framework because it does more than standard libraries usually do. The most common use of React is to build dynamic user interfaces for single-page web applications. But the structure of React makes it useful for more than just creating websites. JSX, which is one feature of React, is a syntax extension for Javascript that provides a template for the HTML and manages the state of the element. But JSX can be used as an interface for things other than HTML. React Native uses React to build mobile applications. Here, JSX becomes an interface for mobile UIs instead of HTML. There are even a few libraries that use React and JSX to interact with and manage hardware like React Hardware.

How does React work?

React encourages engineers to write code using a Functional Programming approach. Engineers create components, which are normal Javascript functions. These functions return information to tell React what content should be displayed on the screen. The real power of React comes from the ability to nest or compose these functions inside of one another. This nesting ability encourages code reuse and allows an engineer to write a component a single time, but in many different places.

Is React a framework or library?

Frameworks provide an opinionated approach to building an entire application. Libraries, on the other hand, assist in building a single aspect of an application. With this in mind, React is a library. It assists engineers in presenting HTML in the browser. React has no opinions on how data is fetched, how styling is applied, or how the app is deployed or built.

Is React worth learning?

Yes, React is worth learning. There are a couple of reasons. The first one is that React is in high demand in the software development job market and has been for a few years. If you learn to code in React and can do it well, you will increase your chances of finding a job. This alone is another reason it is worth learning. Website users no longer will settle for old-fashioned sites that won’t update without a page reload. React’s method of dynamically updating the HTML of a web page fits these users’ needs and improves their experience. React has also been around a few years and has stood the test of time. A large portion of websites, both small and large, use React as a frontend framework.

Is React hard to learn?

Every technology or programming language has a learning curve, and React is no different. But it is easy to learn if you are dedicated and determined to create frontend web applications. To make learning React simpler, you should stick to the basics of React before you add any extra libraries, as that will only complicate your learning experience in the beginning. Since React is a Javascript framework, a solid grounding in Javascript will give you a head start. With this knowledge, the unique concept of JSX, React’s templating language, and the way React uses state will be much easier to grasp.

What is the difference between React Native and ReactJS, and which one should I learn?

React, or React.JS, is a front-end Javascript library for building UI components for the web. If you are interested in web development, React is the perfect library to learn to create interactive, dynamic single-page apps, or even full-scale web applications. React Native is a framework for building native mobile applications for both the Android phone and Apple’s iPhone. React Native is still React, which means the syntax and workflow for building applications are basically the same, but the generated components are different. In React, web components are generated. In React Native, the generated components interact with a phone’s native APIs. If your focus is web development, then you should learn React. If you want to build mobile applications, it is best to learn React first and become familiar with the technology before you try React Native.

Why is React so popular?

There are many reasons why React is popular. One reason is that Facebook developed it. The social proof is that if it is good enough for Facebook, one of the most popular social networks on the web, it should be good enough for other applications. React also solved many of the past issues that developers had with developing single-page applications (SPAs). React came out when SPAs were becoming popular, and all the existing frameworks to build them made development complicated and prone to bugs. One feature that makes it better than past libraries is that React is relatively easy to use. Its components are reusable, plus React’s use of the virtual DOM makes it very performant. React should remain popular in the future as each new release brings new features and performance improvements.

The instructor helped me whenever I needed it, and I’ve learned a lot in very little time. Now I can create simple single-page applications, and I fell in love with CodePen and VS Code!

All our content is created/produced as high-quality video/audio to provide you the best learning experience.

See you in the class!

Natural Language Processing with Python: from zero to hero