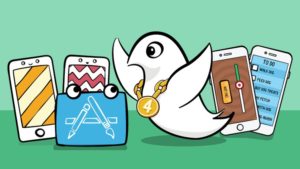 What Will I Learn?

If you’ve always dreamed of creating your own iPhone and iPad apps, then this is the course for you. This course is a comprehensive guide to learning how to build professional quality iOS apps using Swift, the hot, new programming language from Apple.

Throughout this course, you will learn from a team of experts from the most popular iOS development site on the Internet, through a series of over 200 hands-on tutorials. Learn by doing!

In this course, you will:

Hands-On Tutorials from a Team of Experts

According to the 2017 StackOverflow Developer Survey, iOS developers earn an average of $100,000 per year, and Swift is in the top 5 most-popular programming languages. So if you’re looking for a fun and rewarding career, iOS and Swift development is where it’s at!

There’s no better way to learn than from the team behind the most popular iOS development site on the Internet, with over 21 million pageviews per year. We’ve helped thousands of developers learn how to make apps, start new careers, or create the next killer game. Many of our students now work at companies like Facebook, IBM, Capital One, and Amazon.

We believe the best way to learn is by doing, so our entire course is focused around hands-on tutorials and challenges. Best all, you aren’t just learning from one person  — you’re learning from a massive team of iOS experts, who all share their battle-won advice with you.

Through a series of over 200 high-quality, hands-on tutorials, you’ll learn everything you need to know to create your own apps — even if you’re a complete beginner.

You’ll start the course with a bang by diving straight into your first app: an entertaining game called Bulls-Eye. You’ll then take a deep dive into the Swift 4 language itself and cover fundamental programming concepts such as variables, loops, and classes using fun and interactive Swift Playgrounds.

Once you’ve covered the basics, you’ll move into more advanced sessions that teach you all the skills you need to know to make professional iOS apps, including Table Views, Collection Views, Scroll Views, Auto Layout, Core Data, Animation, NSURLSession, Firebase, and much more.

In each lesson, you’ll follow along side-by-side with the instructors as you build your own apps. You’ll also get to test your knowledge with hands-on challenges and practice what you learned. The course content has been tailored exactly for you, the beginning developer, because you want to get up-to-speed as quickly as possible — without wasting time on unimportant details.

By the end of this course, you’ll be ready to create that amazing iOS app you’ve always dreamed of, submit it to the App Store, and show it off to your friends.

Enroll in iOS 11 and Swift 4 for Beginners today – we look forward to beginning your iOS adventure with you!

Microservices with Node JS and React

Prev Next
Leave A Reply
Cancel Reply
Search Your Favourite Course
Subscribe to Blog via Email
Join 6,133 other subscribers